I'm very proud to present my own group, the Pierre Dunker Quartet. It's my first music project that will portray a first portion of the many compositions I wrote. This is the first step...

Bernard van Rossum - saxophones
Bernard van Rossum is an Amsterdam based saxophonist, composer and arranger.
Along with his own Flamenco big band, he won various prizes in jazz competitions. With his own quartet he regularly tours Europe. Bernard grew up in multicultural setting, born and raised in Spain by an English mother and Dutch father. After a rocking adolescence playing drums, he discovered the saxophone and with it, the universe of jazz. Bringing his own sound into the group, he is now the front man of the Pierre Dunker Quartet. 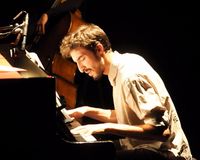 Avishai is an Israeli pianist and composer living in Amsterdam for the past decade. His style is derived from North african traditional music, Western classical music, American jazz and Israeli folk amongst others. In 2010 he completed a Bachelor degree at the Jerusalem Academy for Music and Dance under the guidance of Erez Barnoy, Ilan Mochiach and Ittai Rosenbaum.During his studies, he travelled to New York City (2008-2009) in order to expand his international experience, where he've studied with the likes of George Cables and Bob Cranshaw. In late 2010, he moved to The Netherlands in order to complete a joint-honours degree program at the esteemed Conservatory of Amsterdam, studying both jazz music and classical composition.

After a couple of years of collaborations with great names such as the Dutch/Moroccan Ud virtuouso Mohamed Ahaddaf, while holding a the position of Pianist and Arranger for the prestigious Amsterdam's Andalusian Orchestra under the leadership of Maestro Abderahim Semlali, Avishai now is taking over Ryan Hanseler's position as the new pianist of the Pierre Dunker Quartet. 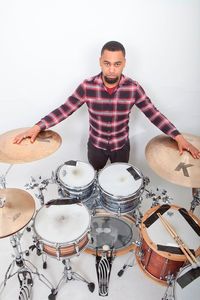 Yoran Vroom - drums
While being the youngest member of the band, Yoran has an outstanding career sharing international stages with names like Cory Henry, Frank McComb, Ed Motta and recording with Frank Gambale and Hadrien Feraud. Yoran has a gift of applying his ample spectrum of rhythmical portfolio to carry any composition to it's highest intent. This all while maintaining humility and space for music. Yoran holds a bachelor degree in music performance at the Amsterdam Conservatory is now the drummer of the Pierre Dunker Quartet.